How does an employee’s military leave affect 401(k) loan repayments? 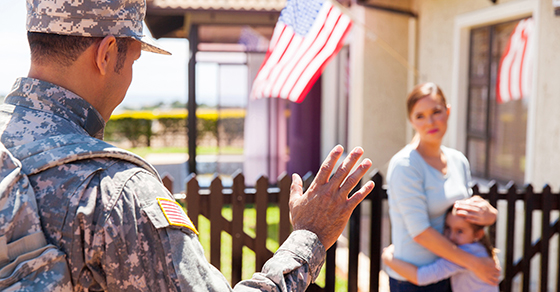 For a military leave, your 401(k) plan may permit suspension of loan repayments for the entire leave period even if it exceeds one year. Also, you may extend the loan term to the maximum permissible term plus the period of military leave. Interest on the outstanding loan would continue to accrue during the military leave suspension period.

When a participant returns from military service, loan repayments must resume in substantially level payments. Because interest continues to accrue during military leave, the participant’s postleave loan balance will be greater than the preleave balance. The plan may permit the participant to either:

Also note that the Servicemembers Civil Relief Act (SCRA) provides that the interest rate on 401(k) plan loans (and other loans) during a period of military service cannot be more than 6% per year. The law imposes a criminal penalty for knowing violations of the interest-rate limit. Although the SCRA requires servicemembers to give the plan notice of their service orders, plan sponsors may want to consider imposing the 6% interest limit on any outstanding plan loan of a servicemember on military leave to avoid criminal penalties.

Although 401(k) loans aren’t an ideal way for participants to deal with financial needs, many people still look to them as a valuable resource. Contact us for help navigating the rules for military leave and other types of leave.